A Brief History of Sharks 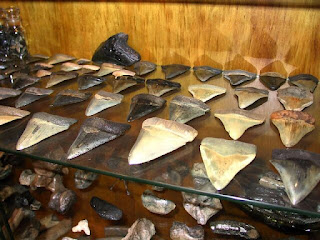 Sharks date back further than land vertebrae and even most plant life.  The earliest Sharks that are agreed upon by experts to be true Sharks go back to the Silurian Period almost 420 million years ago.  They had an appearance very different from the look of a modern day Shark and only scale fossils have been recovered from these prehistoric creaturs.  One of the most ancient and primitive Sharks is the Cladoselache from 370 million years ago, the fossils of this shark were found within Paleozoic Strata in Ohio, Kentucky and Tennessee.  The Cladoselache was only about one meter long or 3.3 feet and had sturdy triangular fins and a slender build.   A very interesting characteristic of the Cladoselache is that it is not believed that this Shark regrew teeth the way modern Sharks do.

Almost all Sharks that lived within the years from 300 million years to 150 million years ago can be placed in two categories: the Xenacanthida and the Hybodonts.  The Xenacanthida were almost exclusively fresh water Sharks and by the time they were extinct their population had spread worldwide.  The Hybodonts lived mostly in the oceans but also in freshwater.

The modern Shark dates back 100 million years.  The earliest Great White Shark teeth have been found 60-65 million years ago around the time of the Dinosaurs.  One of the most recently evolved Sharks is the Hammerhead Shark which can be found off the coast of South Florida in the Miami Deep Sea Fishing arena.

The excitement of Shark Fishing Miami waters aboard the Therapy 4 fishing yachts is an experience unmatched by any tourist attraction.  Hooking a fish that possibly lived millions of years ago is something you will never forget.
Posted by Captain Stan Saffan at 3:59 PM