Captain Stan and America's Bravest on The THERAPY-IV

The United States Army Special Forces, also known as the Green Berets, are called upon to defend American interests in some of the most dangerous situations in the most hostile regions of the world. Currently deployed throughout Afghanistan in Operation Enduring Freedom, the Green Berets have seen heavy combat and have been critical in maintaining US strongholds throughout volatile regions throughout the eleven-year war.

Captain Stan and the crew of the THERAPY-IV welcomed Sgt. Greg Stube, on a Miami deep sea fishing excursion that was filmed for the television show “Coming Home with Sgt. Stube” televised on the popular Sportsman Channel. The show highlights positive sporting activities for soldiers returning from overseas. 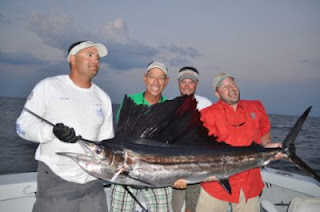 The trip was a success with Sgt. Stube catching a sailfish and his son Greg catching a fine barracuda. South Florida is known for its quality Miami sailfishing and these particular fish are some of the most exciting big fish game in deep sea fishing. The show includes amazing footage of Sgt. Stube catching an large sailfish and his son reeling in an aggressive barracuda. It also has interviews with the Captain of the THERAPY-IV for 45 years - Stan Saffan. The show highlights the importance of staying active with outdoors sporting activities for the mental and physical health of returning soldiers.

Captain Stan is known for hosting military service people on The THERAPY-IV. They recently hosted a bachelor party for recently returned soldier from Afghanistan and make it a point to have service people enjoy themselves on their trips as a way of saying thank you.  He donated his 58 foot boat for Fleet Week, donated a flag and flag pole to the Haulover Marina and donated an American flag mural which sits at the entrance of the marina.
Posted by Captain Stan Saffan at 4:02 PM