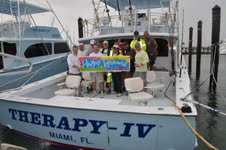 The trip started off in inclement weather with winds up to 50 MPH and rough waters, but soon cleared up in time for some memorable fishing. The group took a leisurely ride up the inter-coastal waterway before returning to the bay for some serious fishing. They caught a couple Ameberjacks before Major Denis hooked a giant Tarpon – an exciting battle between the Major and a monster tarpon ensued.

Major Denis Grealish brought the tarpon in and subsequently let it go. Overall, the event was a success. The Major’s friends and co-workers celebrated with a delicious chocolate cake, surprised him with a “Happy Retirement” sign and received souvenirs in the form of great pictures taken by Captain Stan of The THERAPY-IV. 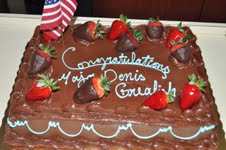 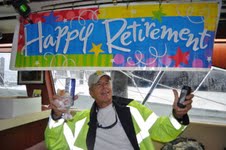 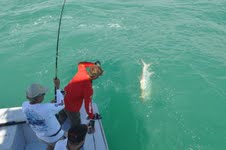 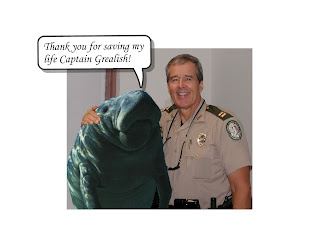 The THERAPY-IV is equipped with world-class fishing gear along with such creature comforts as indoor bar and flat screen television. There are two boats in Captain Stan’s fleet allowing for more trips to be taken per-day with both boats containing incredible amenities and features. Posted below are pictures from the epic trip.
Posted by Captain Stan Saffan at 10:33 AM