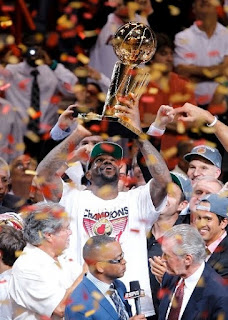 It's final - The Miami Heat are NBA Champions!!!!! The city of Miami is still in a frenzy in celebration of their beloved team. So many story lines, so much anticipation, so many expectation finally comes to an end with Miami, LeBron James and the Heat on top. It was definitely a team effort that allowed the team to effectively dispatch a very talented Oklahoma City Thunder team, but all eyes were on the league and series MVP - LeBron James. His triple double in the final game and near perfect performance in the previous three games was the talk of the championship. As the clock ran down - LeBron James unbridled joy was clearly evident.

The Miami Heat didn't just win the series -they dominated. With the exception of their Game 1 loss against the Thunder - there wasn't a doubt in anyone's mind that Miami would prevail. Winning the series 4-1 is impressive enough - but the final game Miami took a commanding lead.  Rarely in a basketball game - is the game a forgone conclusion at the star of the 4th quarter, but that was definitely the case last night.

After the game - Miami turned into one giant party. With pots and pans being banged from Kendall and Little Havana to Miami Beach and even Fort Lauderdale. This team allowed the nation to see the kind of city we have - a fun loving and pride-filled place.

Now that the confetti and fireworks have settled - all that is left is the epic parade schedule for Monday. The city of Miami will be in attendance for this massive party. The event has also been dubbed "LeBron James Coronation". However, King James has yet another Big Decision to make - he can choose to take Captain Stan's offer for a free deep sea fishing Miami trip. He Dwayne Wade, Chris Bosh, and the entire Miami Heat team still have an offer from Captain Stan on the table. What will it be King James - do you accept our offer?
Posted by Captain Stan Saffan at 10:40 AM