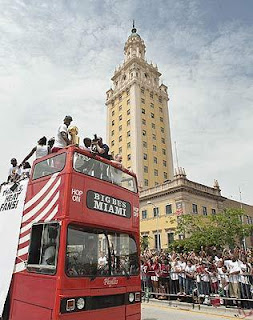 Miami marks a city-wide Miami Heat celebration today. Small businesses will be closed around the city and big corporations will be shocked at the number of people calling in sick – it’s Miami Heat Celebration Day!!! Starting with a parade in Downtown Miami and building up into an all-night extravaganza, Miami will display one of its best qualities…celebration.

In case you’ve been living on another planet the last couple months, the Miami Heat won an NBA title last week in an incredibly impressive performance against the Oklahoma City Thunder. The OKC Thunder were very challenging opponents who deserve better than an early exit from the finals – but the Miami Heat were just too dominant. LeBron James performed masterfully throughout the series earning him the MVP trophy. His happiness with the outcome was incredibly evident for someone who keeps a very cool attitude through big events.

Local Miamians have come together in a way reminiscent of the early 90’s performance by the University of Miami and the early 70’s performance from the Miami Dolphins. There is an aura of dynasty in the air. We don’t want to put too much pressure on our players who have delivered more than enough with a NBA title, but no one in their right mind thinks they are done performing.

Along with the city-wide celebration happening today, the offer by Stan Saffan of a free deep sea fishing Miami trip to LeBron James, Dwayne Wade, the Miami Heat players, Head Coach and mascot Burnie, Captain Stan has extended his offer to the Miami Heat cheerleaders who also helped in keeping morale of fans and players up. Captain Stan and The THERAPY-IV are extremely excited about the NBA title win and the chances that players will accept their free deep sea fishing trip offer. We will keep you updated here on the The THERAPY-IV blog.
Posted by Captain Stan Saffan at 3:55 PM