The THERAPY-IV Invites You to Celebrate Fourth of July Deep Sea Fishing in Miami! 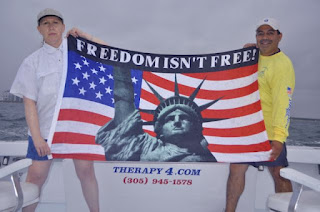 That being said, if you are going to choose a deep sea fishing charter this Fourth of July – The THERPY-IV is the way to go. They will go out four times total Wednesday July 4th between their two fishing yachts for half-day trips. Their deep sea fishing yachts are top-of-the-line with high quality fishing equipment, expert crew members, indoor bars and flat screen televisions. The THERAPY-IV has all the expertise and creature comforts needed for a truly epic 4th of July deep sea fishing excursion.

A little more background on Captain Stan and The THERAPY-IV; they were featured on a the Sportsman Channel TV Show “Coming Home with Greg Stube” which highlights sporting activities for soldiers returning home from war. Captain Stan has also donated an American flag and flagpole to the Hualover Marina. He also facilitated the renovation of Haulover Marina sign to include an American flag mural. Being a fishing Captain for over 45-years, Stan Saffan has continuously grown in his pride for America and belief in the American Dream.
Posted by Captain Stan Saffan at 12:11 PM