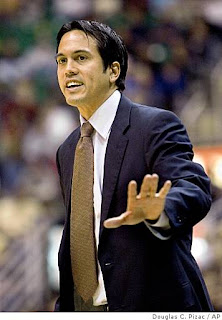 The THERAPY-IV, which is a deep sea sport fishing vessel in Miami Beach, Florida, extended an offer two weeks ago to the Miami Heat – an NBA professional basketball team. After the first two games of the conference final, Captain Stan Saffan of The THERAPY-IV offered free Miami deep sea fishing trips to the Heat’s top players LeBron James and Dwayne Wade after their stellar performances. The next week Miami Heat fell three games behind in the series and Captain Stan extended his offer for a free trip to all Miami Heat players. The Miami Heat then won the next two games winning the conference finals putting them into the NBA finals which start this week.

Many people have been asking what Captain Stan will do next to incentivize the local sports team to win it all. Captain Stan and The THERAPY-IV responded by offering the Miami Heat Coach Erik Spoelstra a free trip also. After all, the best players may get the spotlight but the supporting cast and the Head Coach play equally vital roles. Erik Spoelstra has been coaching the Miami Heat since 2008 and has won the Conference Title twice and lost in the NBA Final last year. He is an incredible coach who coaches and incredible team.

Captain Stan Saffan is a proclaimed “#1 Heat Fan” who flies Miami Heat flags over his two amazing deep sea fishing yachts out of the Haulover Marina. He also donated a Miami Heat flag that flies over Haulover Marina itself. He has operated his deep sea fishing vessels in South Florida for over 45 years and in that time – seen the positive impact of local sports teams. Captain Stan knows what the Miami Heat winning the NBA title can bring to the city of Miami and Miami Beach – that is one of the main reasons he has extended these offers. We will keep you updated on Erik Spoelstra response.