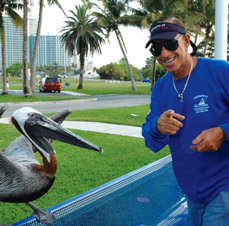 July 11th is a very important day at the Haulover Marina in Miami Beach; it’s Captain Stan’s birthday who has been Captain of The THERAPY-IV Miami Deep Sea Fishing vessel for over 45-years. In that time, Captain Stan has taken thousands of people on deep sea fishing excursions and developed long lasting friendships with passengers, crew and others at the Haulover Marina and beyond.

Captain Stan began fishing at the age of seven with his father and brother at the Haulover Beach. He then began working as a deckhand on the all-day drift boats. He worked weekdays, weekends and holidays till he built his own deep sea fishing vessel he named “THERAPY” in 1976. From that point on, Captain Stan became one of the most well-known deep sea fishing boat Captains in all of South Florida. He had a reputation for great customer service and incredible expertise in catching big game fish. In 2010 he added another boat to his fleet also named “The THERAPY-IV”. Both boats have top of the line fishing equipment, indoor bars and flat screen televisions.  Captain Stan has earned numerous awards for quality services in his more than 45-years as Captain.

Captain Stan is well known within the armed services community for donating his time, services and boats to supporting soldiers and service people.  Captain Stan and The THERAPY-IV were featured on Sportsman Channel’s Coming Home with Captain Stube which is a show dedicated to displaying great sporting activities for US Military Veterans. The Captain also donated his boat to the 2012 US Navy Fleet Week which was held in Fort Lauderdale just north of Haulover Marina.
From everyone at the Haulover Marina, US armed services and local South Florida community – Happy Birthday Captain Stan.