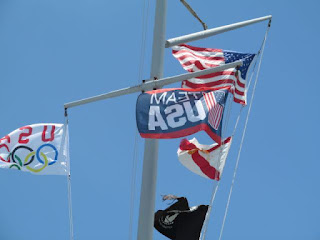 The THERAPY-IV has covered the Olympics the past couple weeks reporting and editorializing the many exciting events and happenings this summer in London. Along with being incredibly patriotic, the Captain and crew of The THERAPY-IV are big sports fans and enjoyed every event of this Olympic competition. Of course, being patriotic Americans, The THERAPY-IV was thrilled with the performance by our athletes. The USA won in overall medal count and the most gold medals in Olympic competition. The THERAPY-IV was also extremely pleased to have accurately predicted three gold medal results for Team USA: The Men’s Basketball, Women’s Soccer and Women’s Gymnastics.

Men’s Basketball – After disappointing performances in previous Olympics, the USA Men’s Basketball Team performed flawlessly – handily defeating some of the world’s best basketball teams. They were one of the last teams to face a gold medal final but came out on top. Led by LeBron James, Kobe Bryant, and Kevin Durant, this star-studded team produced the kind of results expected of them under heavy pressure. Well done Team USA.

Women’s Gymnastics – American women were the real stars of this Olympics. Accounting for a majority of overall medals for the US, American women showed their athletic dominance in scores of events. Women’s gymnastics is perhaps one of the most anticipated events of the Olympics and Team USA performed flawlessly to take the team gold. Additionally, Aly Raisman took the individual gold in gymnastics furthering American presence on the podium.

Women’s Soccer – The US Women, ranked #1 in the world, did not disappoint despite heart stopping action in the semi-finals. With just seconds left to go – teenager Alex Morgan sealed the US victory in a tough game against Canada. Women’s soccer proved to be one of the most aggressive sports this Olympics which made for great competition and exciting matches.

The THERAPY-IV is proud to have cheered on our champions, we apply the same enthusiasm with our deep sea fishing Miami trips and Miami inshore fishing. Go TEAM USA!!!!!!!
Posted by Captain Stan Saffan at 11:41 AM