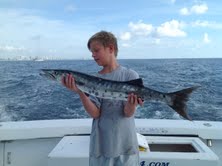 A fun time was had by all when a family decided to go on a deep sea fishing Miami trip aboard The THERAPY-IV.  One of the fishing adventurers was an 11-year-old named Robert who caught a massive 40’’ barracuda he was able to mount on the wall in his room as a permanent reminder of this great fishing trip. It’s moments like these and hundreds of others that have made The THERAPY-IV the leading deep sea fishing charter in Miami Beach for over 45 years. Along with a beautiful barracuda mounted on his wall – Robert also has this incredible picture taken after catching one of the toughest fish to catch in South Florida.

The barracuda has a reputation as a fierce predator with a bad temper and stern resolve. With its sleek build, this creature is also one of the fastest fish in the ocean and a whole lot to handle on the end of a fishing pole. Battles with these fish can last long periods of time but with the expert guidance of The THERAPY-IV captain and crew along with some strength and endurance – you too can have one of these prize on your wall.

The THERAPY-IV is known for its deep sea fishing trips which go out four-times-a-day from Haulover Marina. They specialize in catching marlin, sailfish, shark, tarpon and more. Recently, The THERAPY-IV also facilitates Miami inshore fishing trips where you can easily catch tarpon, barracuda, jacks, snapper, snook and more.

Posted by Captain Stan Saffan at 11:52 AM