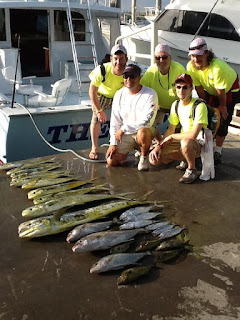 Miami Fishing is an enjoyable activity that many South Florida residents take part in. Visitors especially as they look to take advantage of this great South Florida weather. Fishing is an activity that is shared with others as you can share stories with each other. Stories about fishing allows fisherman to share their adventure with others. Those who did not fish with you have trouble seeing what you’re seeing when the story is told.
This is why fishermen take pictures of the fish they captured, to show what they accomplish. Pictures of these fish will help confirm stories told. Fishermen everywhere enjoy looking at awesome fish pictures. Every fishermen has their own set of pictures they enjoy sharing. Most Miami Fishing charters have pictures they share with fellow fisherman. There are many charters from Haulover Marina that do the same, including the THERAPY-IV. Pictures from the THERAPY-IV are posted a number of times a week. The Haulover Marina charter posts awesome fish pictures on Thursdays. On this day of week, the THERAPY-IV posts some of their best pictures from the week. These pictures range from marlin, sailfish, tuna, shark and more.
Pictures from trips feature those who caught the fish as they are standing next to the fish they captured. Some pictures have a group of people who worked together to capture the fish. There are other pictures of an individual with a fish they caught on their own. The THERAPY-IV already has hundreds of great fish pictures displayed on their Facebook account. Many more pictures are on the way, as people love taking pictures while Miami Fishing. Some people show off their fish at Haulover Marina once the trip is over. Thursday is the day for awesome fish pictures from the THERAPY-IV at Haulover Marina.
Posted by Captain Stan Saffan at 10:00 AM

Email ThisBlogThis!Share to TwitterShare to FacebookShare to Pinterest
Labels: miami fishing, the THERAPY-IV