Get Your Tickets Today for the Sony Open Tennis 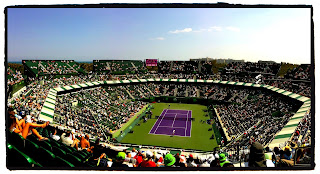 Today is the last day of February as tomorrow is the beginning of many great events. The THERAPY-IV crew wants you to enjoy and take full advantage of the month of March. When you’re not out Miami Inshore Fishing, there are plenty of other things to do. One big event in the month of March is the Song Open Tennis tournament. This tournament has been in the location of Miami since the 1960’s. Sony Open Tennis is a long lasting tradition for tennis players around the world.
Both men and women compete in this tournament in their own separate divisions.
Some of the largest tennis names in the world will be present including Novak Djokovic, Andy Murray, Rafael Nadal, Serena Williams and more. Every big name will be present as all are always looking to be the best in the world. For the Men’s division, recent champion for the past two years has been Novak Djokovic. This tournament is a great indicator on who the best tennis player is as Djokovic is the best player today. Women’s division, there have been different champions since 2008 when Serena Williams won two years in a row.
This will be a fun and exciting tournament for tennis fans everywhere.
Don’t miss out on this wonderful opportunity, as one of the biggest tournaments in the world will be right here in Miami. Song Open Tennis will be in Miami from March 18-31 as now is the time to purchase tickets. When you’re not going out Miami Inshore fishing on the THERAPY-IV during March, visit this tournament and view the best tennis players in the world. You can call now 1-800-725-5472 or visit online to purchase one of your very own tickets for this tournament.
Posted by Captain Stan Saffan at 10:00 AM