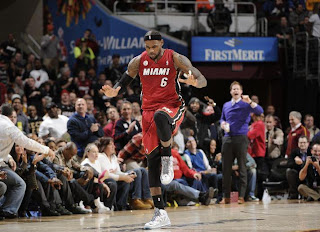 The THERAPY-IV’s favorite Miami Heat has won again to extend their streak to 24 games. This game had a lot of drama even without the streak, as Cleveland is where Lebron came from. Fans from Cleveland still have trouble getting over “ The Decision” Lebron made to take his talents to South Beach. The game was delayed due to a roof leak causing water to be on the court. Water on the court could be very dangerous for players, especially athletes of this caliber. Delay was for 25 minutes as players and fans patiently waited. Once the game finally started, Cleveland went on an incredible run. Cleveland Cavaliers are already underhanded some of their best players including Kyrie Irving. Last night’s game meant a lot of Cleveland and their fans as they gave Miami everything they had to offer.
This is not anything new as Miami has been getting the best from every team during their 24 game winning streak. Teams in general give there all towards the defending champs to set the bar for themselves. Most games involving the Miami Heat are on national television so teams against them want to show the country what they are all about. First quarter was getting out of hand as Cleveland was building a tremendous lead. Miami Heat players were out of rhythm and had difficulty performing the simplest of tasks. Basketball is a game of flow and the Miami Heat was out of sync. Towards end of the half our Miami Heat were getting them together. After halftime the Cleveland built an even larger lead that was up to 27 points. Everyone who has been watching this streak knows that Miami players their best in the fourth quarter.
As the fourth quarter started, the Heat was on fire. Shane Battier was the spark that Miami needed with three point shots he was making. In the end our Miami Heat won another game in dramatic to win their 24th game in a row. Miami Deep Sea Fishing charter encourage to continue showing your support for the Miami Heat as we are the pulse that drives this team.
Posted by Captain Stan Saffan at 4:01 PM