Miami Heat and Hurricanes are on FIRE!! 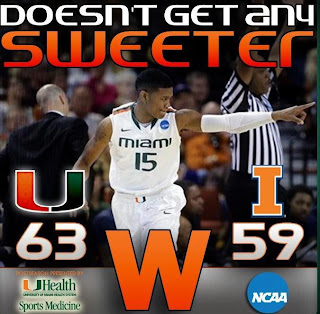 Miami Beach Deep Sea Fishing Charter wants to continue showing our support for the Miami Heat and Hurricanes. Both teams are on a tremendous run as it’s been a while since either team as lost. Right the Miami Hurricanes entered the Sweet 16 for the first time in their school’s history. University of Miami (UM) won last night after a very competitive game against Illinois. The game went down to the fourth quarter when UM’s best player Shane Larkin hit a clutch 3-point shot. This shot changed the momentum when they needed it most.
Over the past few weeks our local college basketball team has both ACC Conference Championship in the regular season and tournament. The Hurricanes are on their way to win another title, the grandest of them all, National Championship. University of Miami is generally known for their football program or even baseball at times, but never basketball. This year’s Hurricane’s basketball team is breaking school records by the week. Let’s continue to show our support as they are on their way to their first Sweet 16’s appearance.
Is there enough that can be said about the Miami Heat? They continue to win games regardless of being home or on the road. Miami Heat has beaten every team in the NBA this season as they have defeated many of them during this streak. Every game becomes more difficult as probability says this should not be happening. Teams that play the Miami Heat play their best game of the season in order to stop the streak. Last night the streak was on the line again without All Star Dwayne Wade playing. Again the Heat overcame the odds and easily handled the Charlotte Bobcats by over 30 points. Miami Deep Sea Fishing charter from Haulover Marina wants you to continue your support for our local basketball teams.
Posted by Captain Stan Saffan at 3:57 PM