The Miami Heat Trail on Past 27 Wins 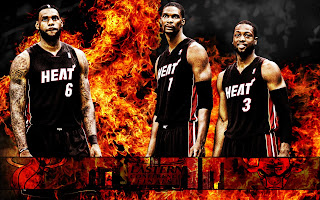 Miami Deep Sea Fishing charter continues to show all support towards the Miami Heat during their now 27 game winning streak. The Miami have already defeated every team in the NBA this season, many of them during the streak. Only 6 games away from the NBA record that is 33 games by the 71-72 Lakers. This record would be a tremendous achievement considering how many great teams; coaches and players have not met this milestone outside the 71-72 Lakers. One could claim that it’s more difficult to win consecutive games in the NBA due to travel and salary cap.
Outside the city of Miami, many fans are cheering on for the Heat to break this record. Only two years ago fans all over the country hated this game Miami Heat team. There are still people who are not fans of the Miami Heat in certain parts of the country, but not nearly as many. This winning streak is not only big for the Miami Heat, but the NBA as well. Miami’s winning streak is important for the NBA as this month is usually a boring one for this league. All the attention is generally towards
March Madness and the NFL draft as the NBA is coasting. Almost every game during this winning streak is nationally televised for fans to watch. Right now we are witnessing history with our local NBA basketball team. We are fortunate enough to witness history live in person every week during Miami’s home games. Continue to show your support for the Heat whether it’s going to the game, watching on television, listening on the radio or representing the team with memorabilia. Fishing charter from Haulover Marina encourages everyone to continue showing your support for our Miami Heat and their amazing winning streak.
Posted by Captain Stan Saffan at 7:06 PM