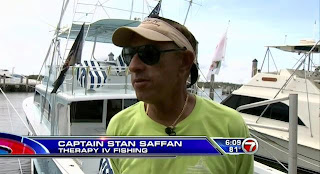 Miami Deep Sea Fishing charter Captain was recently featured on the Channel 7 news due to budgets being cut for the Take a Hero Fishing Tournament. This tournament is opportunity for us citizens to give back to the military that have served and protected us. These military men and women have put their lives on the line for our well being. United State is a free and peaceful country due to our military serving to protect us. Fleet week will not be what we are accustomed to as the event will be limited to local military only. This year there will not be any war ships or submarines present for the celebration.
Those cutting the budget do not fully understand the significance of this event. Budget would have shut down the entire event if it weren’t for charters like the THERAPY-IV. Fleet is continuing due to the commitment from the guys at THERAPY-IV. Captain Stan wants to give these fine military personal from all over to have an opportunity to go Miami Deep Sea Fishing. Entire THERAPY-IV crew heavily supports the troops as each boat has a “Support Our Troops” placed on them.
Budget cuts are not only affecting Fleet Week but also the Fort Lauderdale Air Show as well. The Fort Lauderdale Air Show will not be featuring its headline act due to cuts. Unfortunately the Air Show will have to go without participation from the military. The Channel 7 News interviewed the THERAPY-IV Captain, as he was vocalizing his support for the military and Fleet Week. That week is a very huge week for the THERAPY-IV and supporters of the military. Be sure to continue showing your support for the military as we do everyday from Haulover Marina.