Miami Heat Get Their Revenge with Win #64!! 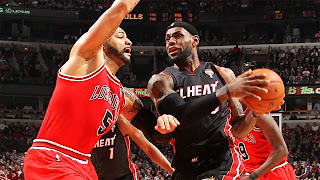 Miami Deep Sea Fishing charter wants to recap last night as the Miami Heat looked to get revenge on the Chicago Bulls. Not too long ago the Chicago Bulls ended the Miami Heat’s historic run with a 27 game winning streak. A conference rival who has been playing without their best play all year long snapped winning streak. Last game the Heat and Bulls played was very physical and talked about for days. Post game comments were made about Lebron mentioning the level of physicality of that game. President Pat Riley stood up for Lebron and stood by his player’s side on the topic.
Chicago Bulls are not at the Miami Heat’s level so they choose to take it to a physical level. Additional pushes and shoves occur on the end of the Chicago Bulls in order to get to the Miam Heat’s head. This game was personal as Lebron, Dwayne Wade and Chris Bosh played after sitting out previous games. It’s important for the Heat to have an edge as they may meet at the playoffs. This game was no different than the last one as the Chicago Bulls were pushing and shoving all game long.
There was a play when Chicago Bulls Carlos Boozer shoulder charged Wade while Nate Robinson (Bulls) pushed James from behind while running. All the pushing and shoving was not enough as the Miami Heat won their 64th game of the season. Lebron and Wade both ended the game with over 20 points. Role player Chris Anderson played a critical role as he scored a season high 15 points.  No surprise that Lebron James was the best player on the court again as he had 24 points, 7 rbeounds and 6 assists. We only have two more games until the playoffs, as the THERAPY-IV from Haulover Marina is getting ready for it.