Miami Heat Sweep the First Round 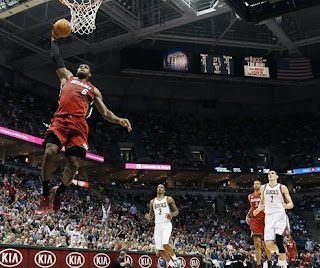 Miami Deep Sea Fishing charter wants to celebrate another NBA Playoff win for our Miami Heat, this round is over. The first round of the NBA Playoffs is over for the Miami Heat as they swept the Milwaukee Bucks. Last night our local team finished the series with another dominant win. This game gives the Heat sometime to rest as Dwayne Wade sat out last night due to injury. Many teams in the NBA Playoffs have lost players or not 100% due to injuries.
Rest is so important in the playoffs as players are dropping left and right. Lost Angeles Lakers were recently swept largely due to injuries and not having their players playing. The Lakers had to rely on inexperienced players against the crafty veteran San Antonio Spurs. In order to make it and win the NBA Finals, it’s important to have the best and healthiest team. Having rest between rounds is why this sweep is as important as it is. Last year’s NBA Finals match up already lost their second best player. Injuries shape the playoffs for better or for worse. These injuries give other players an opportunity to step up. Fortunately the Miami Heat were able to win last night without Dwayne Wade as the role players have been playing well all season long.
Even though the Heat have 3 All Stars in their starting lineup, they also have one of the deepest teams in the NBA. Miami Heat is a veteran team that can afford to rest without losing a team. Less experienced teams need as much game time as possible while rest only hurts these teams. This first round sweep is a great achieve but is only the beginning as our Miami Heat head towards the finals. Miami Fishing charter wants you to continue showing support for our Miami Heat.