One Down, 15 More Playoff Wins to Go! 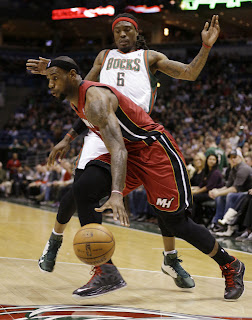 We have finally started the NBA Playoffs as the Miami Deep Sea Fishing charter is fired up. Our local professional basketball team the Miami Heat dominated in their first playoff game. The opponent for this playoff series is the Milwaukee Bucks. This team tends to play their best basketball against us like many other teams in the league. Milwaukee Bucks have young talented players who will not make it easy for our Miami Heat. The Bucks were disruptive throughout the game causing the Heat to turnover the ball about 20 points.
Despite the turnovers and aggressive play by the Bucks our team pulled through and dominated. Despite the fact the Miami Heat was turning the ball over our team was very efficient on the field. Miami Heat team as a whole shot over 55% percent on the field, which is an unbelievable percentage for an entire team. Lebron James led the charge with 27 points, 10 rebounds and 8 assists. James nearly hit another triple double in his first playoff games in 2013.
Lebron was incredibly efficient as he shot 9 for 11 on the field. Our team won by 20 points despite the turnovers and aggressive plays from the Milwaukee Bucks. Last night’s game sets the tone as our Miami Heat use their home court advantage against the Bucks. Miami Fishing charter encourages South Florida residents to show their support for our Miami Heat throughout the playoffs into the NBA Finals. Every team is full of professional athletes so it’s important for our team to perform every night. Heat fans were voted as the best fans of the NBA. Let us continue being the best fans for the best team in the NBA.