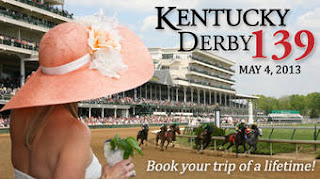 Miami Deep Sea Fishing charter wants to remind you about the Kentucky Derby this weekend. As many of you know, this is the biggest horse race of the year. Kentucky Derby is one of the largest sporting events of the year. People come from all over the country to enjoy this race. Whether you’re watching it on TV or live in person this is a great event to watch. Thousands of competitors from the horses, to their trainers, owners and jockeys dream to be in the event. There are only 20 competitors with some of the fastest horses in the world.
Many say that this race is the fastest two minutes in sport this weekend. Horse racing season and tournament since September 29, 2012 are all leading to this event. Prep season was from the beginning until February 18, 2013. After the Prep Season for horseracing, was the Championship Series – 1st Leg that ended in March 24. Immediately following the 1st Leg is the 2nd Leg into the Wild Card. The Wild Card Championship Series was from April 20-27 to then the grand finale this weekend. Competitors have had a week to rest for the big race. Tournament is limited to 3 year old thoroughbreds so they must be around that age when starting the Prep Season races.
There is a separate route to reach the Kentucky Derby that is through the Kentucky Oaks competition. These competitors run at the Churchill Downs before the derby. Many television sets will be viewing this tournament throughout the weekend. Bets are being placed from some of the biggest names. Be sure to take time out of your weekend to enjoy the 2013 Kentucky Derby this weekend. Miami Beaching Fishing crew the THERAPY-IV hopes everyone has a great weekend.