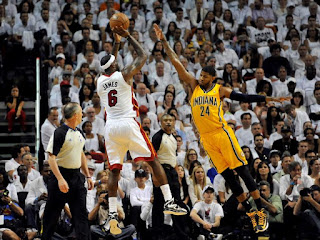 Miami Fishing charter is proud to announce that the Miami Heat won their first game in the Eastern Conference Finals. Last night’s game went to overtime as the score stayed close all game long. Pacers play Paul George shot a 3 pointer about 10 feet from the arc to tie the game. This shot shocked the crowd that led to the game going to overtime. Miami Heat did not play their best game last night, as the Pacers were a big reason for that. Both teams were struggling with the referees as foul calls were being made all game long.
Many fans believe that the refs took over the game as foul calls were made almost every other play. Foul calls were even made during critical moments when Dwayne Wade barely touched a Pacer’s player towards the end of the overtime. This foul gave Pacers the opportunity to gain the lead towards the end of the game. After the free throws were made, Heat were only given about two seconds to make a final shot.
This moment belonged to Lebron James as he grabbed the ball past Paul George to score the game winning layoff. Lebron James made this shot at the buzzer, as there was no time left in the game. Home crowd exploded when James iced the game to win in front of our fans. Everyone from Miami went home happy after a long and competitive match up. Deep Sea Fishing in Miami charter was fans to continue showing their support, as Game 2 is tomorrow night. As fans we have to give the Heat a home court advantage. Winning the first two games is critical towards gaining an edge and winning the series. We hope everyone had a great time last night and show support for the Heat tomorrow night.