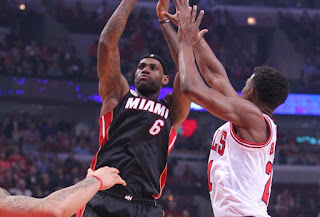 Tonight is the night we have all been waiting for since Friday night as we are looking to win another game this playoff series. Right now we are up 2-1 against the rival Chicago Bulls as this series has been anything but easy. Despite having a depleted roster, this team has put up a good fight against our Miami Heat. The opposing team deserves tons of credit for making this series as competitive as it is. One thing they will not receive credit for is their unsportsmanlike like conduct. Chicago Bulls have been attempting to get to our players heads by antagonizing them.
This attempt has failed as our Heat players have turned the other cheek and not once overreacted to a situation. Players have stood up for themselves, but no further action from there. Hopefully tonight will be the beginning of the end as we look to gain a 3-1 lead and be one game away from winning. Tonight will give the Miami Heat an opportunity to come back home with plenty of momentum. Miami Deep Sea Fishing charter has been following this team like all you South Floridians have.
We have to continue showing our support throughout the series as tip off happens at 7PM. Players such as Dwayne Wade needs the rest for his knees so it’s best to end this series as quickly as possible. Miami fans wearing their white hot heat t shirts as the crowd will be covered in white with cheering fans. These fans were rated the #1 fans in the NBA, so let’s keep up the good work. The THERAPY-IV is doing their part by proudly waving a Miami Heat flag on the boat. Be sure to show your support whether you’re at the game, bar, restaurant, radio or watching it at home.