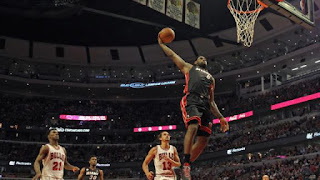 Miami Beaching Fishing charter was to congratulate the Miami Heat on another win last night against the Bulls. This win has completely changed the momentum of the series. The likelihood of Bulls winning this series is now slim to none. Last night the Miami Heat established their dominance, especially in the second half. Bulls put up a good fight until the entire team ran out of gas and didn’t have the energy to keep up with Miami Heat. Matchup was cleaner than the previous two as no players were ejected or fouled out of the game.
Many would consider last night a sloppy offensive yet defensive game at the same time. Chicago Bulls scored a franchise playoff record low 65 points as the Heat scored a lower than average 88 points. Lead was maintained throughout most of the game. The Bulls also had a franchise low 9 points in the 3rd quarter with no offense put together. Lebron James once again dominated as he was flirting with another triple double. Chris Bosh had another stellar game was he was very efficient on the floor with 7 of 10 shooting. Last night’s game was a defensive match up without all the extra curricular activities.
Two teams played a competitive game of basketball, great to watch as a Heat fan. Miami Heat did what they have been doing all season long by breaking down an opponent until they second half when they run away with the game. Our team only has to win one more game in order advance to the Eastern Conference Finals against the winner of Pacers and Knicks. We have been doing a great job supporting our team; let’s keep up the good work. Fishing charter from Haulover Marina will continue to wave their Miami Heat flag proudly.
Posted by Captain Stan Saffan at 2:06 PM