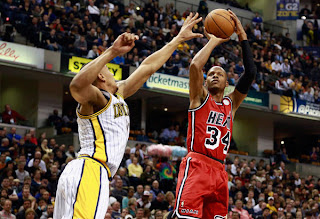 Miami Deep Sea Fishing crew wanted to congratulate the Miami on winning the second round series against the Chicago Bulls. Miami Heat are now in the Eastern Conference Finals three years in a row. The series was only 5 games but it felt like 7 for many of us. Bulls fought hard to the very end as the last game was decided by 3 points. Now we have a few days to relax and look forward to playing the Indiana Pacers. This team plays against the Heat very well similar to the Chicago Bulls.
Pacers team is healthy with all of their players after George Hill got back in the lineup from injury. Last year the Pacers had the Heat down 3-2 in a playoff series before Miami came roaring back to win the series. Game has not even started and there is already tension between the two opposing teams. Indiana Pacers head coach claimed that the Miami Heat is just another team to play in the next series. Lebron James responded with saying that his team is not just another opponent, but a great time.
Heat will be ready to go as they have six days of rest waiting to play the Indiana Pacers this Wednesday night. We hope to start the Game 1 on a good note by setting the tone in our home court in Miami. Fans will be ready to go in their white shirts to represent the white hot Heat that already have an amazing 8-1 playoff record so far. Defending champs are expected to win this game and series, but it can't be taken for granted. Let's keep the momentum going and make this another short series as we look to win another NBA Championship. The THERAPY-IV wants everyone to continue supporting the Miami Heat this playoff run.
Posted by Captain Stan Saffan at 5:16 PM