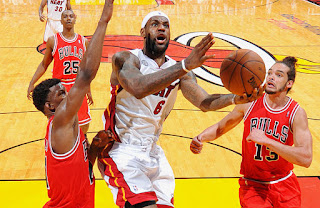 The THERAPY-IV wants to congratulate the Miami Heat on their Game 3 win over the Chicago Bulls. Our local NBA basketball team is now up 2-1 in the series. This game was another hard fought battle with plenty of tension similar to game 2. The Bulls are undermanned with plenty of injured players, but they play their best against us. It doesn’t who the Bulls have playing on their team, they will make it tough on our Miami Heat. Unfortunately the Chicago Bulls have resorted to unsportsmen like conduct by pushing and shoving after plays to antagonize our players.
This fun game of basketball has become a fighting match at times from both sides. But we have veteran players with good temperament as we do not let them get into our heads. There was an ejection last game for a player shoving Lebron James into the floor. Our Miami Heat overcame the odds yet against as we have a one game advantage over our rival Chicago Bulls. The next game tomorrow night will be played in Chicago as we will be looking to get another win before going back to Miami. This playoff series has been very tough and competition, much more than most believed it would be.
Give the Bulls credit as they are not going down without a fight. Miami Heat welcome the challenge as they will only get better between now then hopefully win the NBA Championship. Large part of their success outside of their talent and skill is the support they get from our fans in South Florida. Miami was rated the number one fans in the NBA, let’s keep up the good work. Miami Fishing charter wants you to continue rooting on for our Miami Heat as they are on their way towards another NBA Championship.

Email ThisBlogThis!Share to TwitterShare to FacebookShare to Pinterest
Labels: miami fishing, the THERAPY-IV