Back to Back Championships!! 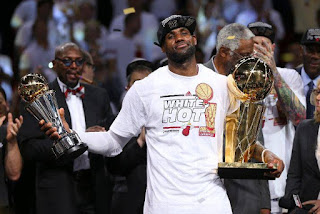 Last night’s game is one to remember for a long time as the Heat won back to back championships for the first time in franchise history. Game 7 was close all game long as the Heat were holding on to a small lead throughout the match up. San Antonio Spurs did not back down as they stayed in the game, had the lead at times. Miami Deep Sea Fishing crew and the rest of South Florida are proud of our Miami Heat. The Heat has overcome the odds, especially during the playoffs and NBA Finals against Spurs.
Dwayne Wade had another huge game as he was hitting mid range jumpers all night. Spurs were giving Lebron and Wade the long mid range jumpers so they couldn’t drive to the basket. The San Antonio Spurs have used this defense approach all series long, but tonight it did not work. Both James and Wade were taking what was given to them as they were shooting long 2s and 3s all night long. Lebron James shot more 3s than he did all series long, he happened to make most of them.
Role player Shane Battier was been struggling throughout the playoffs but had a huge game last night. Battier went six for six on three point shots as it was huge to keep Miami in the lead. With seconds left in the game, Miami Heat was only up 4 points as every score counted. Game 7 eventually ended with the Heat being crowned as NBA Champions.  Everyone in South Florida had a great time as fans were partying from Downtown Miami to South Beach. All Star Lebron James was awarded the NBA FINALS Most Valuable Player, as he rightfully deserves. Deep Sea Fishing in Miami crew encourages everyone to be at the parade, Monday at 11AM as we will be there as well. GO HEAT!!