We finally did it; our Miami Heat won the NBA Championship!! Miami Deep Sea Fishing charter hopes everyone who went to the parade had a great time. South Florida has been at an all time high since Thursday night when the Heat finally won it all. Friday morning felt like a holiday as everyone slept in from all the fun the night before. All stars and role players alike played a huge role in winning Game 7 in order to wrap up the series. 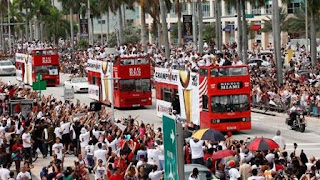 San Antonio Spurs were an amazing opponent who deserves all the respect in the work. Two teams were evenly matched as any team could have won the series. Many say that the Spurs had the series won at Game 6 before our Miami Heat made that historic comeback. This championship was not only for the players but our community as well. Hopefully this championship will silence most of the critics as we have won 2 out of 3 years. Miami Heat season was already historic before winning a championship with that 27 game winning streak. Lebron James pulled the trifecta with the championship ring, regular season MVP, Finals MVP and also won Olympic Gold over the summer.
Yesterday was a huge event for Miami as the downtown area was swarmed with fans to welcome our champions. Today we are recovering from all the fun and excitement that was from the Heat’s 3rd NBA Championship. Miami Heat has now won 2 out of 3 NBA Championships since Lebron James and Chris Bosh signed with the franchise. Now there is the summer to look forward to in this great South Florida weather. We can start looking forward to 4th of July and many other festivities. Deep Sea Fishing in Miami trip may be exactly what you need after all the partying for the Heat’s 3rd NBA Championship.
Posted by Captain Stan Saffan at 4:20 PM