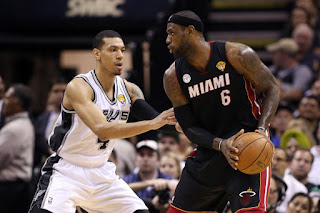 Tonight is Game 6 of the NBA Finals as we are trying to keep this series alive after being down 3-2. Fortunately tonight and the potential Game 7 will be at home in front of our great fans. San Antonio Spur have given us their best shot with great performances by their players, now it’s our turn. It’s time for Lebron James to once again show why he is considered the best in the world. Dwayne Wade has been playing great basketball the past two games; he just has to keep up the good work.
Offensively the Heat did well last game, they just had trouble stopping the Spurs from scoring especially Danny Green. This Spurs player already broke a record for the most 3 pointers made in the NBA Finals. Our team has to slow down the Spurs offensive and create turnovers so they can player their style of game. Miami Heat is at their best when creating turnovers and in the open court in transition. James and Wade are practically impossible to stop in the open court without fouling. Deep Sea Fishing in Miami charter is not afraid, as we know the Heat will come ready to play tonight.
It has been five months since the Miami Heat have lost back-to-back games, not once in the playoffs. Tonight is our night to show why being home is an advantage for the Miami Heat. We the fans have to bring all the energy and excitement to pump up our players. Local celebrity is already banned from tonight’s game for “too much energy close to the Spurs bench”. The THERAPY-IV and rest of South Florida will be ready for tonight as we look to win and extend the series to Game 7.
Posted by Captain Stan Saffan at 10:38 AM