Time to Tie the Series Up Tonight! 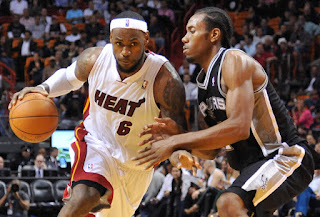 Game 4 of the NBA Finals is tonight as we are looking to tie the series against our opponent San Antonio Spurs. This series has been going back in forth similar to the conference championship as each team has been going blow for blow against each other. The third game was rough as our players struggling both offensively and defensively. Lebron James, being the leader that he is took responsibility and guaranteed a better performance for tonight.
Tonight’s game will be in San Antonio where they play great basketball. Fortunately for our team, Miami Heat plays great basketball on the road as well as at home. Miami Heat is looking to step up in order to win tonight and tie the series 2-2. It’s important to stay loyal as fans when times get rough, especially after a tough loss. One can easily be a fan when there is plenty of success without opposition. Now is time for true Heat fans to step up to show their pride for our Miami Heat.
We as fans have to step up as well to show our full support for the Heat. Deep Sea Fishing in Miami charter encourages to step up as fans by watching the full game, for better or for worse. Heat and Spurs are evenly matched teams as both look to pass the ball around and look for open shots. Spurs had a career games from some of their players while Lebron had the worst playoff game of his career, this will not happened again. Whether you’re at the game or watching at home, stand up and cheer for our NBA team. The THERAPY-IV crew will be watching this game closely just like everyone else in South Florida. GO HEAT!!

Posted by Captain Stan Saffan at 11:39 AM