What a Win Last Night!! 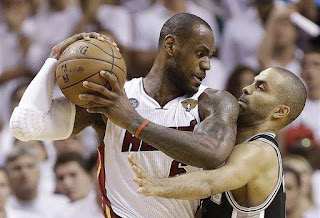 Last night’s game was an unbelievable event that will be remembered for a long time. Fans from all over could not take their eyes off the game, as it was competitive all night long. Spurs and Heat were going back and forth up until the 4th quarter where it seemed that San Antonio had won the game.
During the final quarter it seemed as though the Spurs had complete control of the game. San Antonio gained their largest lead of the game with only minutes remaining. There were NBA officials already setting up the NBA Championship celebration in the likelihood of the Spurs winning the title. But the game isn’t over until the final buzzer rings as the Heat came roaring back with a courageous effort. Lebron James personally put the team on his back and put them in a position to win the game. Despite the great effort of James and 3 pointing shooting the Spurs still had a lead until the last minute. Miami Fishing charter watched nervously as this nail biting game was decided in the last few seconds. With only second remaining in the game the Heat shot a 3 pointer, missed it, rebounded and passed it out to Ray Allen with about 5 second remaining. Ray Allen may have very well made the most clutch 3 point shot in Heat history. The 3-point shot the Ray Allen made allowed the Heat to tie with only 5 seconds remaining.
Game 6 went into overtime when the Heat stepped up into another gear. Miami Heat won this hard fought battle in overtime and tied the series 3-3. Tomorrow night we are looking to win it all, as Game 7 will be at home in front of our home crowd. Deep Sea Fishing in Miami charter is excited to be a part of such a great spectacle that is the Miami Heat.