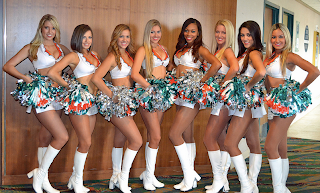 It may have become evident that we, Miami Dolphin Fishing crew the Therapy-IV, are very enthusiastic and excited about our local team, the Miami Dolphins. We, as major sports fans, love to keep tabs on everything to do with the Dolphins, including beloved Miami Dolphins Cheerleaders. As Dolphin Season approaches, the ladies have begun preparing, officially opening practice. On their official website, there are opening practice photographs that are sure to inspire any fan to get pumped for the season.

Taking a peek into the world of the Miami Dolphins Cheerleaders reveals a group of very active women who are not only incredibly active physically, but also partake in various charity runs and walks, as well as trips around the world to represent the team and promote Pro-Football. This year alone, they have already visited Canada, Hawaii, Egypt, China, Mexico, Spain, Italy, Greece, Cuba and Turkey. Some charity runs they have benefited include the Spartan Race, Riverwalk Run, Race for Women’s Wellness, 5K to End Homelessness, the Multiple Sclerosis 5K, and the Gumbo Limbo Green Turtle Gallop.

In other news, for the first time in Miami Dolphins Cheerleader history, the squad will be posting the 2014 Swimsuit Calendar Girls online, revealed over a six week period. The calendar was shot in Samana, Dominican Republic, on location at the Grand Bahia Principe El Portillo for the fourth year.  Every week, two calendar months will be exhibited on their official site, along with a behind-the-scenes video of the photo shoot for each girl. At the conclusion of the six weeks, the annual Swimsuit Fashion Show and 2014 Calendar Unveiling will be hosted at the LIV nightclub in the Fountainbleau Hotel on September 5th.

I’m Captain Stan of the Miami Deep Sea Fishing crew and I’ve been a passionate sports fisherman since I was a young man. To plan your trip with us, call us at 305-945-1578.

Posted by Captain Stan Saffan at 11:08 AM