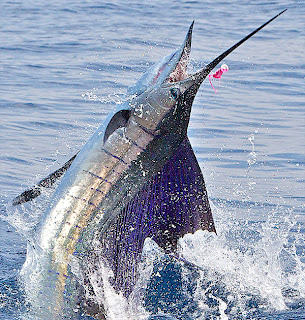 To seasoned anglers, there is nothing more thrilling than the tell-tale tug of a “monster” on the fishing line. Monsters, as they are affectionately nick-named, refer to big game fish such as Marlin. The Marlin, iconic inspiration for the Miami Marlins and Hemingway’s animal protagonist in The Old Man and the Sea, is especially considered by many fishermen to be the pinnacle of deep sea fishing. This is due to the size, power, and speed of the species, which weigh, on average, between 200 to 400 lbs and can swim as fast as 70 miles/hour. Miami Marlin Fishing is an adventure available to anyone through The THERAPY-IV fleet- our boats are even outfitted for wheelchair accessible fishing.

In the past, it required considerable skill to capture a Marlin, but the top-of-the-line equipment found on the THERAPY-IV makes fishing them today more plausible, effective, and comfortable. These features include a large tuna tower for spotting Marlins and other big game, giant live bait tanks, giant outriggers for spacing the baits apart and a giant flying bridge with a captain’s chair and two fighting chairs. Marlins tend to flap wildly after being caught, but the cockpit fishing area is equipped with a giant transom door for boating the monsters safely.

Located in Halouver Marina, The THERAPY-IV fleet is just 6 minutes from the gulf stream, a prime spot for catching Blue and White Marlins as they migrate. Our crew has over 40 years experience fishing Miami’s coastline, which makes us the premier experts on Miami Deep Sea Fishing. Booking a fishing trip with The THERAPY-IV is easy-reservations can be placed online or over the phone- and pricing is reasonable- we match any legitimate pricing of comparable fishing charter boat services. Contact me, Captain Stan, for further information at 305-945-1578 or via http://www.therapy4.com.
Posted by Captain Stan Saffan at 10:03 AM