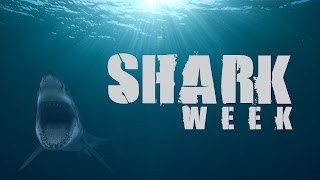 It’s Shark Week! Very-much fans of the highly-anticipated, yearly television event, we at the Therapy-IV love to celebrate with our clients by embarking on one of Miami’s most exciting pastimes. Miami Shark Fishing is an action-packed adventure perfect for novices seeking an exciting trip or experienced fishermen who love the challenge of big game. Our fascination with- and perhaps fear of- sharks hasn’t waned since the movie “Jaws” came out in the ‘70’s, as is clearly shown in the millions of watchers of Shark Week every year. The Therapy-IV crew is the best, and safest, choice for those who dream about going Shark Fishing.

There are many varieties of big Sharks that swim in our Gulf Stream waters year round, including big Hammerhead, Tiger, Mako, Blacktip, Dusky and Thresher sharks. They can range from 25-1,000 pounds. The largest Hammerhead Shark that we have caught aboard the THERAPY-IV was 15 feet long and weighed 1,024 pounds! Recently, even Great White sightings have been increasing off the coast of Florida. Catching a shark requires incredible skill, a trait the Therapy-IV crew does not lack. On top of that, you need the right equipment, and our boats come with top-of-the-line equipment that makes fishing them today more plausible, effective, and comfortable. These features include a large tuna tower for spotting sharks and other big game, giant live bait tanks, giant outriggers for spacing the baits apart and a giant flying bridge with a captain’s chair and two fighting chairs. Sharks are strong fighters and can be very big and very powerful; the cockpit fishing area is equipped with a giant transom door for boating the large monsters safely, with less hassle and strain. If you have been thinking about trying to catch a shark for a trophy, replica trophy mounts are available with catch and release of the shark.

Posted by Captain Stan Saffan at 10:00 AM