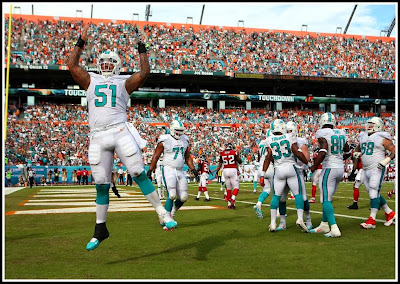 It was a fantastic weekend for Miami football fans, as both games resulted in the Dolphins and ‘Canes moving on with a 3-0 season so far!

The Miami Dolphins closed on a win against the Atlantic Falcons yesterday, who put up a good fight and did all the right things. Rising star Ryan Tannehill, the team’s quarterback, led the Dolphins to a 27-23 win, making them 3-0 for the first time since 2002. These spectacular performances since the start of the season is getting Tannehill noticed, and many consider him to be the new Dan Marino- the Dolphin’s franchise quarterback. Catch the team’s next game on September 30th against the New Orleans Saints at 8:30 pm.

This weekend marked an astounding win for the Miami Hurricanes, as well, as they crushed Savannah State with a 77-7 victory. The record-breaking game went smoothly but for an injury to starting quarterback Stephen Morris. Six minutes in, Morris fell with a right-ankle sprain, but in those few minutes he led the Canes on two scoring drives. The injury was diagnosed as minor enough to get Morris ready in time for their game on Saturday against USF.

We at the Therapy-IV love our sports and will be keeping you up-to-date on latest news and updates in college and pro-football. What better way to celebrate this week's victory than to enjoy a day out at sea for some Miami Dolphin Fishing. If you’re looking for a thrilling day out, consider us for your next Miami Deep Sea Fishing trip. Call me, Captain Stan, at 305-945-1578.
Posted by Captain Stan Saffan at 12:13 PM