Are You Growing Your Mustache for Movember? 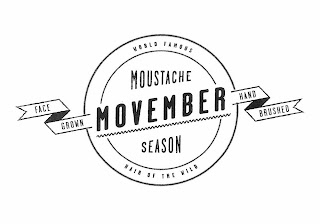 By now you’ve probably heard of “Movember,” November’s Prostate Cancer Awareness campaign that challenges men to change their appearance and the face of men’s health by growing a moustache. The rules are simple, start Movember 1st clean-shaven and proceed to grow a moustache for the entire month. The moustache becomes the ribbon for men’s health, the means by which awareness and funds are raised for cancers that affect men. Much like the commitment to run or walk for charity, the men of Movember commit to growing a moustache for 30 days.

The idea for Movember was sparked in 2003 over a few beers in Melbourne, Australia. The plan was to simultaneously bring the moustache back as a bit of a joke and do something for men’s health. No money was raised in 2003, but the guys behind the Mo realized the potential a moustache had in generating conversations about men’s health. Inspired by the women around them and all they had done for breast cancer, the Mo Bros set themselves on a course to create a global men’s health movement.

In 2004 the campaign evolved and focused on raising awareness and funds for the number one cancer affecting men – prostate cancer. 432 Mo Bros joined the movement that year, raising $55,000 for the Prostate Cancer Foundation of Australia - representing the single largest donation they had ever received.

The Movember moustache has continued to grow year after year, expanding to the US, UK, Canada, New Zealand, Ireland, Spain, South Africa, the Netherlands and Finland. In 2009, global participation of Mo Bros and Mo Sistas climbed to 255,755, with over one million donors raising $42 Million US equivalent dollars for Movember’s global beneficiary partners.

Make your way to Haulover Marina with your mustache and take a trip with The THERAPY-IV crew for a Miami Deep Sea Fishing experience like no other! Contact me, Captain Stan, for further information by calling 305-945-1578.