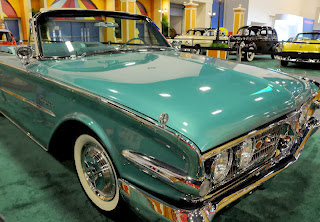 Last week, the Miami International Car Show kicked off, running from November 8 to 17 at the Miami Beach Convention Center. If you haven’t attended the event, be sure to check it out this weekend, there’s only a few days left! The show is perfect for avid car lovers and novices alike, so if you’re looking for a fun experience, don’t miss this popular Miami event!

Recognized as one of the largest and most prestigious auto events in the nation, it showcases more than a thousand new vehicles from over 40 manufacturers from around the world. This world-famous venue includes such popular exhibits as Topless in Miami, which displays convertible cars in a picturesque Miami environment, and Havana Classics, which celebrates the nostalgic vehicles of the 1950s. Other attractions include Ride and Drive, where visitors will be given the opportunity to learn about and test drive a number of the latest vehicles on offer from the manufacturers, and Million Dollar Alley, the event’s collection of luxury vehicles ranging from Ferrari to Lamborghini. It doesn’t stop there. From antique automobile selections and exhibits, to impressive tours on the latest Jeep models, there’s something for everyone at this auto-lovers paradise.

This year will mark the show’s 43rd anniversary, located in the same venue it opened in since 1971. Back then, it was among a handful of major auto shows in America. Now, there are 60 annual auto shows and this production is still among the largest. Since its establishment, the show sought to include the latest technologies in the industry, providing attendees with the chance to see them firsthand. This is a tradition that has maintained, attracting automobile enthusiasts to see one of America’s oldest and best auto extravaganzas.

When you’re done with that, make your way over to Haulover Marina for a Miami Deep Sea Fishing trip with The THERAPY-IV like no other! Contact me, Captain Stan, for further information by calling 305-945-1578.
Posted by Captain Stan Saffan at 3:18 PM