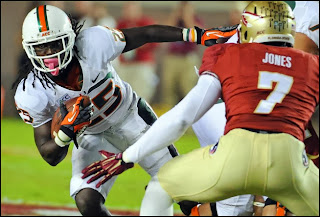 Stay tuned this weekend for one of the season’s most-anticipated games of the year- the battle on Saturday between the ‘Canes and the Hokies. On the line: an inside track to the ACC Coastal Division title with little margin for error as the regular season winds down.

Taking a pre-emptive look  at Saturday’s game, Virginia Tech has a 6-4 advantage over Miami since joining the ACC and is 12-6 since notching its first-ever series win back in 1995. The Hurricanes won last year's Thursday night showdown at Sun Life Stadium, 30-12, but prior to that had dropped 5-of-6 to the Hokies. Atlantic Coast Conference realignment—the addition of Syracuse and Pittsburgh—resulted in a second straight match-up between Miami and Virginia Tech in South Florida, an obvious break for the Hurricanes. Miami (7-1) enters this week's contest coming off a 41-14 loss to Florida State in Tallahassee. Virginia Tech (6-3) has dropped two straight, falling to Boston College and Duke back-to-back-weeks.

We at The THERAPY-IV love our sports and will be keeping you up-to-date on latest news and updates in College and Pro Football.. If you’re looking for a thrilling day out, consider us for your next Miami Deep Sea Fishing trip. Call me, Captain Stan, at 305-945-1578.