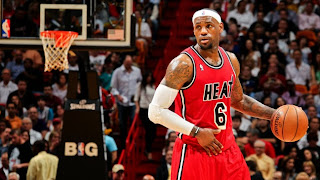 This season, the Miami Heat are going to have to battle one of the strongest fields of competition in recent memory in order to win a third straight NBA title. From the Pacers, Nets and Bulls in the Eastern Conference to the Spurs and Thunder in the West, the targets remain a force to be reckoned with for the second year in a row; but, analysts express a positive outlook for our local team.

An article from the Washington Post provides insight on the upcoming season:

“Including playoffs, the Heat won 78 percent of their games against Eastern Conference opponents last season — the third-best winning percentage any NBA team posted against its own half of the league in the last 16 years. The Heat won 39 of their final 45 matchups with East foes, on the way to capturing the conference title for the third straight year.

“Each and every night, to get up and play at your best, it can be challenging,” said Reggie Miller, the Hall of Fame player who’s now an analyst for TNT. “And with those other teams getting better, it could be a long haul. But, look, as long as you have the best player on the planet, you can never really discount the Heat. And that’s what they have. They always have the ultimate trump card in LeBron James.”

The Heat outscored East clubs by 562 points with James on the floor last season. How dominant is that? Dwyane Wade was No. 2 on that plus-minus list, 192 points behind the league’s four-time MVP. James scored 1,653 points against East teams last season, one point less than New York Knicks star Carmelo Anthony managed against the conference’s teams. Anthony took 244 more shots, though.”

Catch the Heat tonight in a game against the Brooklyn Nets at 8 pm on ESPN. If you’re looking for a thrilling day out, consider The THERAPY-IV for your next Miami Deep Sea Fishing trip. Call me, Captain Stan, at 305-945-1578.

Posted by Captain Stan Saffan at 10:45 AM