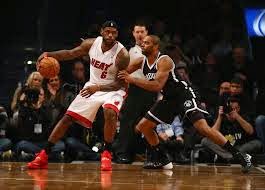 The Miami Heat are potentially just a game away from a fourth straight trip to the Eastern Conference finals, if they win tonight versus the Brooklyn Nets.

Almost from the moment Game 4 of this East second-round series against the Brooklyn Nets ended, the moment where the Heat took complete control of the matchup by riding the strength of LeBron James' 49-point night in a 102-96 victory, all the attention was directed toward what the two-time defending NBA champions figure to be their biggest challenge yet. As the Nets’ season will be at stake, nobody expects it to be an easy game.

"This team is not going to give us the game," Heat guard Dwyane Wade cautioned, minutes after his team took a 3-1 lead in the best-of-seven series. "This series is far from over." That's exactly the mindset Heat coach Erik Spoelstra wants his team to have. Recent history, though, would suggest that Miami is on the brink of advancing.

The task is daunting, without question. For Brooklyn to prevail, it needs to beat the Heat three times in five days, two of those games in Miami, and do so with James coming off a scoring show that matched the best of his postseason career. He made 16 of 24 shots in Game 4, carrying Miami for much of the night.

"The wise one knows that you don't go into it thinking `This is it,'" Heat guard Ray Allen said. "You have to still build on all your habits. You have to go out there and you have to get better. If this is a closeout game, then we don't want to just settle for how we played. We want to get better and think about where we can potentially go."