The Heat Are Up 2-0 Against The Brooklyn Nets 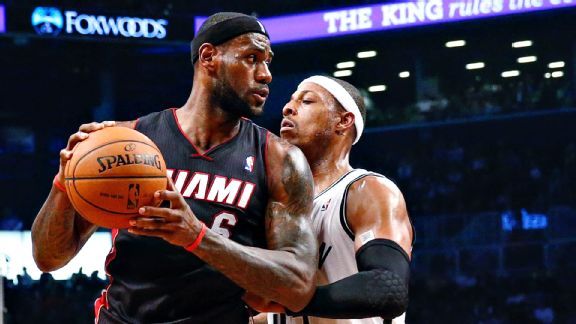 The Miami Heat is once again proving why it’s one of the best teams in NBA history: today they managed to away from the Nets by a commanding 2-0 win their eighth playoff. The two-time defending NBA champions are now two wins from another trip to the Eastern Conference finals.

As the following ESPN recap shows, it was quite a game.

LeBron James scored 22 points, Chris Bosh added 18 and the Heat pulled away late to beat the Nets 94-82 on Thursday night, taking a 2-0 lead in the East semifinals.

"To be able to get some stops like that at the end, and then execute, it's something that's critical in this series," Heat coach Erik Spoelstra said.

Dwyane Wade had 14 and Ray Allen scored 13 for the Heat, who tied a franchise record with their eighth straight playoff victory.

They'll go for No. 9 on Saturday night, when the best-of-seven series shifts to  for Game 3.

For the second straight game,  had five players in double figures."That's what our team is all about," James said. "We don't really care who scores."

At this point, we’ve come to expect nothing less from the Heat, who seem poised to once again score big for . It’s little wonder why Captain Stan and the rest of the THERAPY-IV are so proud of their roots in the city.

Another point of pride is the world-class quality of Miami Deep Sea Fishing, which attracts people from all over the world. You won’t find a better Miami Beach Deep Sea Fishing Boat than the THERAPY-IV, a fleet of two state-of-the-art 58-foot sportsfishing boats.

Decked out with all the tools you need to catch all sorts of fish, you’ll find plenty of modern amenities and comforts as well, including three air conditioning units, a big screen TV, movie theatre, stereo, XM satellite radio, bar counter, bathroom, stateroom, shower, and more.

We set sail daily seven days a week from the lovely Haulover Park Marina. As TripAdvisor’s number one  attraction, our friendly staff and crew guarantee an experience as unforgettable as the Heat’s performance.