A Preview of Thursday’s Game: Heat Versus Spurs 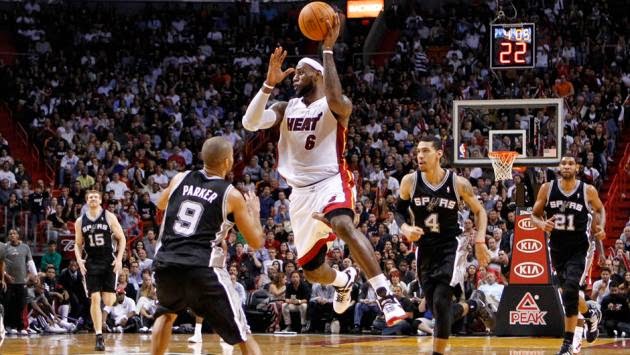 Rematches between two of the best teams in any sport is an exciting affair, especially when it comes to the NBA! Everyone is getting pumped for this year's NBA Finals, kicking off with Game 1 of the Heat vs the Spurs Thursday night (June 5th). Last year, the Heat used some late-game heroics to win Game 6 and then went on to win Game 7 to claim their second championship in a row.

The Spurs begin their quest to avenge their demoralizing championship defeat with Game 1 in San Antonio on Thursday, June 5 at 9 p.m. ET on ABC. Heading into Game 1, the goals are simple: The Heat will attempt to become the first team to achieve a three-peat since the Los Angeles Lakers in 2002, while the Spurs hope to claim the organization’s fifth championship since 1999 but first since 2007.

The location of Game 1 bodes well for San Antonio. Unlike a year ago, the Spurs have home-court advantage. They have been nothing short of dominant on their home floor, blowing out opponents and winning their last seven games by at least 17 points.

A Game 1 Spurs victory would not only give them an early series lead but would also restore the confidence lost during Games 6 and 7 of last year. If the Heat win, they will have won three consecutive playoff games against San Antonio, and doubt could creep in for the Spurs.

While the outcome is still unsure, there is no doubt this game will be thrilling. We at The THERAPY-IV love our local sports teams, so you can look forward to more posts like these in our blog. For information on Miami Deep Sea Fishing, contact us by calling 305-945-1578.