Miami Heat Return Home for Games 3 and 4 of the NBA Finals! 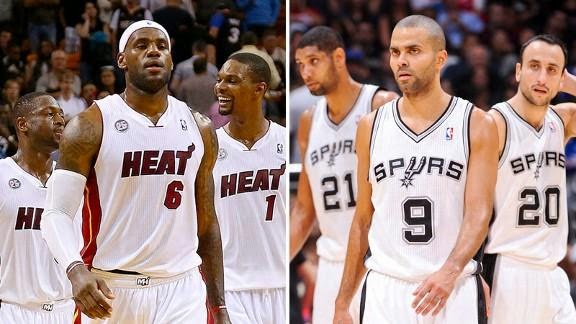 Following their incredible and dramatic victory in Game 2 of the NBA Finals, the Miami Heat left San Antonio with exactly what they had been hoping for- a split of the first two games.  Now the Heat have returned to Miami and began preparing for the Game’s 3 and 4 of the Finals to be played at the American Airlines Arena.

The Heat have won all eight home games during the 2014 Playoffs and going back to last season, have won 11 postseason games in a row played in Miami. “We always have supreme confidence at home,” said Chris Bosh on Monday. “Our fans have been outstanding this postseason.”

Now the Heat will look to continue their dominance this week and take control of the NBA Finals. While the Heat’s home record is something that indicates a true home court advantage, nobody on the team would say that the wins have come easily. “It’s not easy to do at all, we just try to protect home,” LeBron James explained. “We understand that it’s going to be tough. Going against a San Antonio team that’s beat us here on our home floor in the Finals before and we know that. We look forward to the challenge.”

San Antonio took down the Heat in Game 1 of the 2013 Finals, a game that was played in Miami.  That was the last time the Heat lost a playoff game at home. If the Heat can preserve its spotless record at home then when the Finals shift back to San Antonio for Game 5, Miami could find itself just one win away from completing the journey for a third consecutive NBA Championship.

Needless to say, we couldn’t be more excited. We at The THERAPY-IV love our local sports teams, so you can look forward to more posts like these in our blog. For information on Miami Deep Sea Fishing, contact us by calling 305-945-1578.