Team USA Survives the “Group of Death” and Advances! 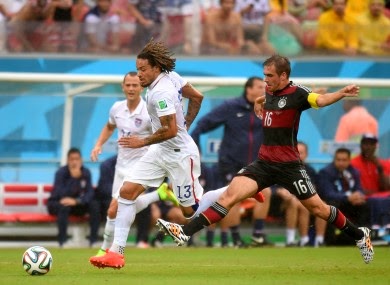 The USMNT held up on Thursday as best as they could against one of the leading scorers this world cup: Germany. Despite a loss by one point, the team still qualified to advance to the knockout round thanks to Ghana’s loss against Portugal.

This resulted in Portugal and the U.S. finishing even on points in Group G—this year's Group of Death—at four apiece, but the U.S. had an even goal differential while Portugal finished with minus-3. The U.S. will play next on Tuesday in Salvador against the Group H winner, Belgium. The loss was the end of a very long and strange day for the game.

The players awoke to a deluge that flooded this city on the northeast coast of Brazil and prevented many of their families from even making it to the stadium. They weren't allowed to warm up on the field for fear it would damage the sponge-like grass. They spent the final half-hour of the game getting score updates on the Portugal-Ghana game while trying to hold off one of the most fearsome and skilled teams on the planet. Athletes programmed to focus only on winning were desperate for a tie, and once Portugal had a lead, simply needed to avoid a lopsided loss.

"As much as you want to go and push the game, you also have to be smart because a draw gets you through," said captain Clint Dempsey. "It's not like a normal game."

The result was a strategic victory for the U.S., which somehow emerged from a group that also included Portugal, the world's fourth-ranked team, and Ghana, which has a history of thwarting the U.S.

Ahead lies Belgium, which won all three of its group-stage games. Team USA doesn't sound intimidated.

"It's nice to play big teams and big players," said Jermaine Jones, the German-American midfielder who has been the team's best player in Brazil. He and his teammates, he says, "are hungry."

We at The THERAPY-IV will be watching closely, hoping for the U.S. win! For more information on Miami Beach Deep Sea Fishing, contact us by calling 305-945-1578.
Posted by Captain Stan Saffan at 4:19 AM