What US’ Tie With Portugal Means for the Team 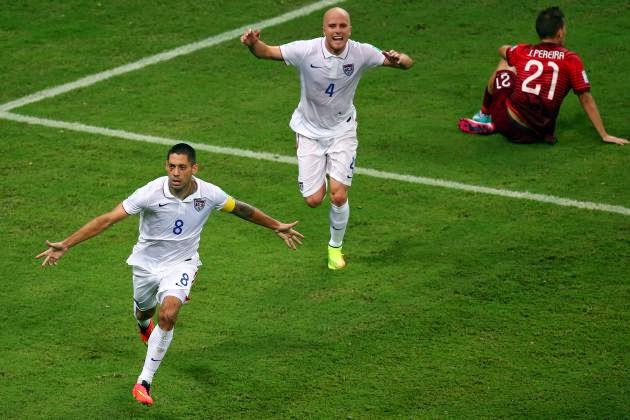 If you’ve been keeping tabs of the FIFA World Cup, you might know that after an amazing game for the U.S. on Sunday, Portugal managed to score the tying goal in the 95th minute. Everyone was excited for the win against the worthy adversary, but a tie is still not a terrible thing. By getting a tie against Portugal, the U.S. is still in fine shape moving forward. The team is tied with Germany at 4 points at the top of the group, and Portugal and Ghana are both tied at 1 point at the bottom of the group. Here is how the next games can turn out:

• A U.S. win over Germany would guarantee that the Americans move forward in the tournament.

• A U.S. tie with Germany would mean that both Germany and the U.S. would have 5 points, and both teams would advance.

• If the U.S. loses to Germany, then it would all depend on what happened in the Ghana-Portugal game. The U.S. will be hoping that Portugal and Ghana tie, which would result in the U.S. advancing no matter what.

• If, by some chance, the U.S. loses to Germany and is tied with Ghana or Portugal in points and goal difference, the next tie-breaker is total goals scored. The U.S. scored 4 goals in the first two games. Ghana has scored 3; Portugal has scored 2.

• If it’s still even after that, here are FIFA’s next tie-breakers:

As you can see, the chances are pretty good for the USMNT. We’re incredibly excited to see how it turns out. For more information on Miami Beach Deep Sea Fishing, contact the THERAPY-IV by calling 305-945-1578.

Posted by Captain Stan Saffan at 11:24 AM