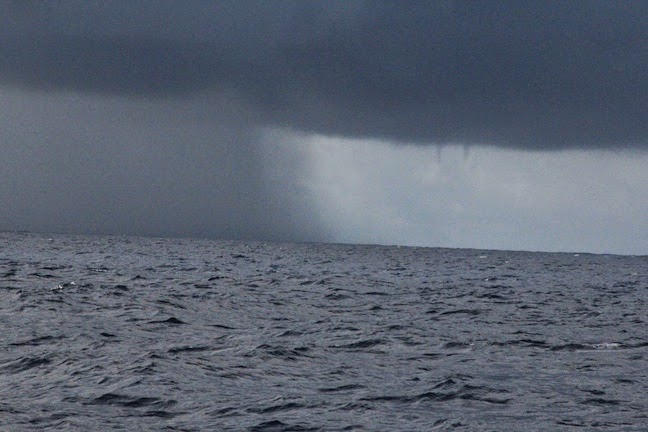 With little less than a month left until the fall season, weather patterns begin to change more frequently and with greater intensity. To the surprise of no Miami native, an angler can often start a day on the water under blue skies, only to find himself facing down a wall of ominous thunderheads in the afternoon.

Interestingly, the weather affects the success of a fishing trip, and many experienced fishermen know when exactly to go fishing on a rainy day. To successfully fish a storm front, you have to understand what is taking place in the atmosphere.

The Good Times: As a storm system approaches, a low-pressure warm front rides up over the top of a high-pressure cold front, causing condensation to take place in the form of clouds. During the time the skies are clouding up, and right on through to the end of the storm, there is a slow and steady drop in barometric pressure that increases as the main body of the system approaches.

Once the main body of the storm hits and moves through the area, rain, winds and sometimes thunder and lightning form along the frontal line. The pressure continues to drop until it bottoms out as the storm runs its course. The fishing should be good this entire time, although lightning and heavy rains on the water's surface might spook fish.

The Bad Times: As the inclement weather moves out, the cold front–a mass of heavier, denser, high-pressure air–begins to rush in behind the low-pressure system. The result is usually windy weather with clearing skies, dropping temperatures and a very sharp rise in barometric pressure.

Large storms will bring in stronger, more powerful and sustained winds, along with a much steeper, higher rise in barometric pressure than smaller storm systems will. It's this clear, windy weather following rainy low-pressure systems that anglers–especially those participating in big-money bass tournaments–dread, because it usually brings the fishing action to a standstill.

For anglers who have studied the activity of fish during rainy weather, they have noticed that the best catch is had during dropping or low barometric pressure. That said, the very best time to be on the water is during the drop in barometric pressure that occurs as a low-pressure system approaches.

For more information on embarking on your very own Miami Beach Deep Sea Fishing adventure, contact THERAPY-IV by calling 305-945-1578.