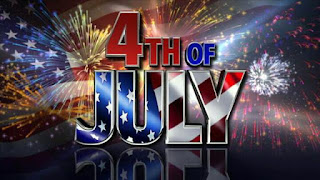 It does not matter if you call it Fourth of July or July Fourth; lets celebrate Independence Day aboard The THERAPHY-IV. Miami Deep Sea Fishing is for everyone, offering a unique experience for the whole family. If you want some one-on-one bonding time or a big party, we have you covered.

July 4th is a federal holiday since 1941 in the United States commemorating the adoption of the Declaration of Independence in 1776.  July 4th has been celebrated as the birth of American independence, with typical festivities ranging from fireworks, parades and concerts to more casual family reunions and barbecues.

Created a different day with your family with the help of our experienced and friendly crew. Dad can reel in all sorts of great catches; mom can enjoy the gorgeous ocean view; the kids can watch the dolphins swimming; and grandma and grandpa can enjoy the amenities like an air conditioned lounge, bar, indoor theater with stereo and satellite radio, bathroom with shower, fridge and freezer, and much more.

End the perfect Independence Day with a visit to your family’s favorite spot to see the fireworks and share a barbeque. Save the best memories on Fourth of July aboard the THERAPY-IV. Pay a visit to our Miami Beach Deep Sea Fishing Charter Boat, or contact us 305-945-1579 or info@therapy4.com
Posted by Captain Stan Saffan at 4:01 PM No comments:

Hop Aboard The THERAPY-IV This Father’s Day 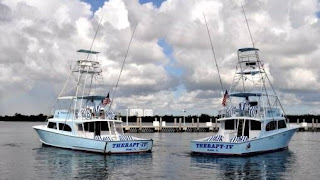 Father’s Day is this weekend, but it is not too late to give dad the most unique experience yet: Miami Deep Sea Fishing! Whether you want some one-on-one bonding time, or want to throw a party, we can accommodate you. Father’s Day Gift Cards are available $180 per person or $750 for private party.

If your dad is a fishing buff, he will fall in love with our Miami Beach Deep Sea Fishing Charter Boat. It is decked out with everything you will need for the ultimate fishing experience: a huge flying bridge with captain’s chair and two fighting chairs, a fishing cockpit outfitted with four fighting chairs, two giant live bait tanks, a giant transom door, and much more.

Even if dad isn’t into fishing, experienced and friendly crew will help him reel in all sorts of great catches, including dolphins, marlins, snook and much more! Aside from the fishing, there is the gorgeous weather and fantastic tropical ambience of the Atlantic Ocean, as well as lots of comfy amenities – an air conditioned lounge, full bar indoor theater with stereo and satellite radio, bathroom with shower, fridge and freezer, and much more.

Nothing shows dad how much you care than a gift card for such a unique experience. Father’s Day is sure to be memorable aboard The THERAPY-IV. To learn more, contact 305-945-1578 or info@therapy4.com.
Posted by Captain Stan Saffan at 4:46 PM No comments: 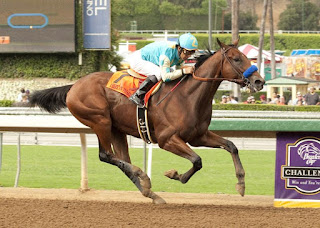 Following repeated victory across the 2015 horseracing season – at the Kentucky Derby, Rebel Stakes, Arkansas Derby, and Preakness Stakes – American Pharoah kept the momentum going and prevailed in the prestigious Belmont Stakes, winning the coveted Triple Crown after leading the race from start to finish as 2:26.65.

The victory by 5 ½ lengths is the sixth-fastest in the race's history and second-fastest time for a Triple Crown. American Pharoah also made history as the American winner of the prize since Affirmed in 1978. To top it all off, the thoroughbred’s 128 rating eared it the top position in the Longines World’s Best Racehorse Rankings for 2015.

It is hard to believe that when he debuted back in 2014, he started off with a poor showing throughout the season. After a brief and well deserved rest period, American Pharoah is slated to run in the Breeders' Cup Classic in late October, as well as in some additional, still-to-be-determined, prep races

In the wider world of horseracing, American Pharoah was not the horse enjoying glory! Golden Horn put in an impressive showing to win the Investec Epsom Derby by 3 1/2 lengths, joining Able Friend and Shared Belief as the joint second-highest rated horses in the world. In France meanwhile, Treve won her seasonal debut,taking the Prix Corrida by four lengths. Now, the joint highest-rated horse in the world in 2013 is set to secure an unprecedented third victory in the Qatar Prix de l'Arc de Triomphe this October.

Posted by Captain Stan Saffan at 1:50 PM No comments: 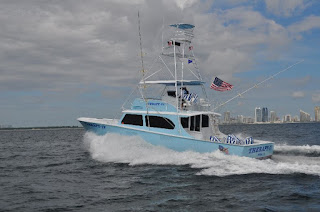 For over four decades, Captain Stan and the crew of The THERAPY-IV have been dedicated to giving people all over the world the finest Miami Beach Deep Sea Fishing experience imaginable. That is why we are delighted by the latest of nearly 700 overwhelmingly positive reviews on TripAdvisor.
Published earlier this week, the title alone makes clear it was a job well done. But we are nonetheless touched and delighted by just how happy we made this valued customer.
This is my fourth time out with Capt Stan and crew and again in was amazing memory. Captain Stan was there at the boat (like always), introduced us to Keith and Captain Marc who were taking us out and made sure we were comfortable. The boat was meticulously clean and stocked for our trip. We left on time (I have been on other boats that haven't) and we had lines in the water in five minutes.

After a short time we were on the fish, first catching some Bonita but then Captain Marc followed his gut instinct to follow a bird and BAM, we were on Mahi Mahi. Keith was all over the lines and next thing I knew two of us were bringing in some Mahi, two were even on my line at once. Then we decided to go a little deeper and we caught two 50-60lb Golden Amberjacks that were beasts and another massive fish. All were great fights and perfect picture moments for everyone on board.

We got back to the dock and Stan was there to welcome us back to land and ask about our experience. Keith was kind enough to filet some of the Mahi and they packed it up for us so I could cook it (which I did the next day and it doesn't get better). What a day!

I read a past post about Stan that makes NO SENSE at all. What a true gentlemen and hospitality provider. Not sure if that person was out to spite the boat for them not catching fish or what, but I will tell you from multiple experiences, that Captain Stan and crew do everything in their power to ensure EVERYONE on board has a great experience. My hat goes off to all the team of the Therapy 4. I will continue to go back and send all of my guests/friends.

Thank you Captain Stan, Captain Marc and Keith for another amazing journey. I am addicted now....can't wait to get back out with you.


Needless to say, we our happy to have made another guest’s day aboard our state-of-the-art Miami Beach Deep Sea Fishing Charter Boat. Decked out in the latest cutting-edge fishing equipment – including a huge flying bridge, fishing cockpit outfitted with four fighting chairs, two giant live bait tanks, giant transom door, and more – we can accommodate anyone and everyone. From experienced anglers to beginners, our crew is friendly, approachable, and ready to give you an unforgettable time.
Enjoy the gorgeous weather and fantastic ocean view as you voyage out towards the Atlantic, or enjoy all the amenities The THERAPY-IV has to offer: an air conditioned lounge, bar, indoor theater with stereo and satellite radio, bathroom with shower, fridge and freezer, and much more.
To experience firsthand what this ecstatic reviewer did, contact our Miami Beach Deep Sea Fishing Charter Boat at 305-945-1578 or info@therapy4.com.
Posted by Captain Stan Saffan at 2:38 PM No comments:

Give Dad An Unforgettable Adventure Aboard The THERAPY-IV 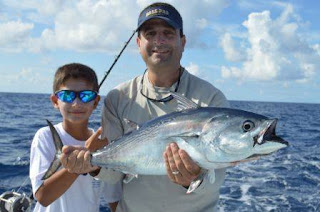 Whether you dad is a fishing aficionado or a totally new to the activity, he will no doubt enjoy the unique fun and experience of Miami Deep Sea Fishing about The THERAPY-IV. What better way to show your love and appreciation of dad than with one of our generous and flexible gift cards?

Our state-of-the-art Miami Beach Deep Sea Fishing Charter Boat can accommodate both private and public trips. So if you want some personal bonding time, or plan to throw dad a party, we got you covered ($180 per person or $750 for private party).

If your dad loves to fish, he certainly won't be disappointed: The THERAPY-IV is decked out in the latest cutting-edge fishing equipment, including large, a huge flying bridge with a captain’s chair and two fighting chairs, a fishing cockpit outfitted with four fighting chairs, two giant live bait tanks, and a giant transom door.

With the help of our experienced and friendly crew, you and dad can reel in all sorts of great catches, ranging from dolphins to marlins, to name but a few! Otherwise, you can take in the gorgeous weather and fantastic ocean view, or enjoy all the amenities The THERAPY-IV has to offer: an air conditioned lounge, bar, indoor theater with stereo and satellite radio, bathroom with shower, fridge and freezer, and much more.

Father’s Day aboard The THERAPY-IV is sure to be memorable. Pay a visit to our Miami Beach Deep Sea Fishing Charter Boat, or contact 305-945-1578 or info@therapy4.com.
Posted by Captain Stan Saffan at 2:34 PM No comments: