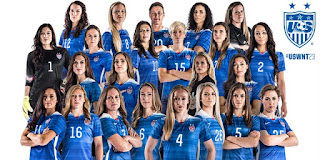 After great matches in Japan, the U.S. women soccer team returns home with a world cup and at THERAPY-IV we are excited by the news and we want to congratulate the team. This is the first World Cup final won by the United States women’s soccer team since 1999.

For the players this is more than just a game, it is a team converts into a family. Lauren Holiday, a 27-year-old player explained “I feel like this team isn’t my identity, it is my choice. There is power in making a choice. I chose this team for 10 years.” And for all the fans, the U.S women soccer team is family too that we choice.

Many Americans didn't miss a second of this exciting match, the game reported the highest rating for a soccer game in the country and almost beat the most watched game in the United States. Now it's time to focus the attention into the domestic women’s league, while waiting for another world cup.