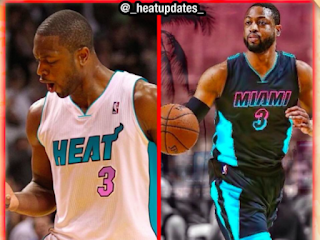 Miami is known for many things, the wonderful weather, entertaining attractions, beautiful beaches, and residents that are even more gorgeous.  However, one of the most famous things Miami is recognized for is Dwayne Wade, considered the unofficial ambassador of Miami Beach and the Heat.  Born January 17th, 1982, Dwayne Tyrone Wade, Jr., began his basketball career junior year at Harold L. Richards High School in Oak Lawn, Chicago.  Crediting famous Chicago Bulls star Michael Jordan as his inspiration and high school basketball coach, Jack Fitzgerald, as one of the most positive influences in his life; Wade was able to focus his skills into becoming an incredible high school basketball player.

As one of the most famous basketball players in the world, Dwayne got his start in the NBA in 2003, when he was a first round draft pick for the Miami Heat.  Starting with a strong rookie year, this prolific player has had many milestones, but throughout them all, he has remained loyal to Miami.  In eleven seasons, he has been named to the All-Rookie team and the All-Star team.  Additionally, he is credited with leading the Miami Heat to their first NBA championship in franchise history in his third season, additionally he was the 2006 NBA Finals MVP.  In 2008, Wade joined the Summer Olympics United States men’s basketball team, where they won multiple gold medals in Beijing, China.

Throughout the rest of the years, Wade was the individual who carried the Heat team on his back, until he recruited Lebron James and Chris Bosh, which led to the Heat winning two out of the four NBA Finals Championship games that they participated in.  Not only is he a great player, but he is also a wonderful leader and philanthropist, as he has helped plenty of people in need with donations and appearances.  Highly influential, many fans consider Miami “Wade County.”  So much so, that he will be the face of the Heat’s Miami Vice themed night.

THERAPY-IV, a Miami Beach deep sea charter fishing boat service, brought this update to you.  This charter provides all of their clientele with a high-end deep sea fishing experience.  With their luxury yacht, exceptional customer service and experienced and professional Captain and crew, visitors can rest easy, they will not only have a memorable fishing experience but will also have the pleasure of visiting the best spots off the coast of Miami and Biscayne Bay.  To schedule a trip and/or to learn more about Miami deep sea fishing, contact 305-945-1578.