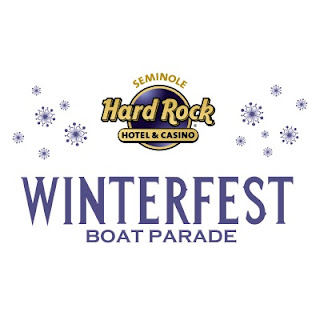 For those of you planning on attending the 45th annual Seminole Hard Rock Winterfest Boat Parade, you might like to know that a certain local celebrity has been named the event’s Grand Marshal. American rapper and “Mr. 305” Pitbull will be kicking off the holiday fun by appearing in one of the numerous boats scheduled to make an appearance.

The Winterfest Boat Parade takes place up north in Fort Lauderdale and has become a major yearly tradition that draws over a million viewers to the New River. The parade encompasses twelve miles featuring boating vessels of various size with dazzling light displays. Pitbull follows in the footsteps of other local celebrities that have been named Grand Marshal including rapper Flo Rida, former Miami Heat player Alonzo Mourning, and singer-songwriter Barry Gibb.

For those of you unfamiliar with Pitbull, many of his songs have become radio staples including hits like “Give Me Everything”, “Timber”, and “Fireball”. His tenth studio album Climate Change will be released this month.

Tickets for the Winterfest Boat Parade costs between $20 to $25. If you can’t make it to the December 10th event, it will be streamed live on the official website.

THERAPY-IV, a Miami Beach deep sea charter fishing boat service, brought this update to you. This charter provides all of their clientele with a high-end deep sea fishing experience. With their luxury yacht, exceptional customer service and experienced and professional Captain and crew, visitors can rest easy, they will not only have a memorable fishing experience but will also have the pleasure of visiting the best spots off the coast of Miami and Biscayne Bay. To schedule a trip or to learn more about Miami deep sea fishing, contact 305-945-1578.
Posted by Captain Stan Saffan at 11:44 AM