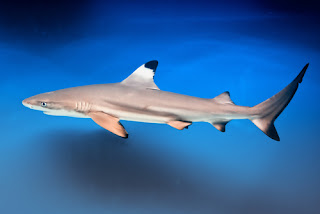 The blacktip shark can often be found swimming in shallow waters and just offshore of Miami Beach. It is recognized by its long gill slits, pointed snout, the lack of ridges between the dorsal fins, and the black tip on the fin that gives the sea dweller its name. Many blacktip sharks can reach a length of more than seven feet.
Although they’re known for their energy, swiftness, and ability to make spinning leaps out of the water to attack schools of fish, the blacktip shark is considered “timid” in demeanor. Despite their fearsome appearance, these sharks tend to be wary of humans. However, if a human does happen to be near a food source, blacktip shark are capable of losing their timidness and have been known to attack people.
With their strong bodies, the blacktip shark is no easy catch. Because of their size, catching them on spinning tackle will not be an easy task. Because of this, they are among the best fighting fish in Miami Beach and are great for experienced fishing fans seek a challenge.


THERAPY-IV, a Miami Beach deep sea fishing boat service, brought this update to you. This charter provides all of their clientele with a high-end deep sea fishing experience. With their luxury yacht, exceptional customer service and experienced and professional Captain and crew, visitors can rest easy, they will not only have a memorable fishing experience but will also have the pleasure of visiting the best spots off the coast of Miami and Biscayne Bay. To schedule a trip or to learn more about sailfish fishing in Miami Beach, contact 305-945-1578.
Posted by Captain Stan Saffan at 10:55 AM